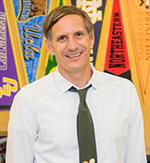 During this time of uncertainty, teachers have risen to the challenge, demonstrating their adaptability, knowledge, creativity, and resilience. There has never been a more important time to highlight the exemplary work educators do on behalf of students. Mr. Koroshec personifies these qualities and we are pleased that he will be representing Santa Barbara County as the 2021 Teacher of the Year,” said Santa Barbara County Superintendent of Schools Dr. Susan Salcido. “Mr. Koroshec is an exemplary educator who advocates for equity, self-awareness, and academic success for all students.”

Choosing the Santa Barbara County Teacher of the Year is no easy process. In the fall, applicants complete an extensive application and submit letters of recommendation. A diverse panel reviews the applications and selects four to six finalists. These individuals are typically interviewed and observed in their classrooms. This year, schools closed just after the five finalists were announced. The process quickly transitioned online with Zoom interviews and presentations by the finalists.

Mr. Koroshec was chosen for his dedication to engaging students through authentic instruction that challenges them on multiple levels, and his passion for equitable access to all educational opportunities. He creates a safe community where students can experience personal growth during their journey to academic excellence. He has seen the effectiveness of this approach in the programs he has developed, including the Developing Independent Artists (DIA), which brought together students with a passion for music, and the Resource Family Association Student Support Team (RFASST). RFASST aims to educate students by providing service and support to families involved in the foster and adopt system. It raises awareness through its speaker series, and supports families through a Parents’ Night Out, where the students provide childcare while parents enjoy time away from their children.

Former student Valerie Carroll reflected, “Mr. Koroshec was by far the most impactful teacher I had at San Marcos High School, and he continues to impact me as I continue my academic career. The space Mr. Koroshec created in his classroom is one that is hard to come by, and seldom recreated. Some of my most important realizations are self-reflection that came to me in his class, in those seats. I will forever be thankful for the lessons Mr. Koroshec taught me, as they are more than knowledge, they are power.”

Koroshec is the Chair of the English Department and serves on the San Marcos High School site leadership team and Secondary English Language Arts Team for the Santa Barbara Unified School District. He also mentors new teachers, has created professional development opportunities, and advocates for social justice and equity. In 2015, he established the San Marcos High School Writing Center to offer students assistance in composition, launched The Conversation, an online literary platform, in 2016, and coordinates an annual poetry slam and writing contest for students.

Santa Barbara Unified School District Superintendent Cary Matsuoka said, “Stepping into Frank Koroshec’s classroom is like entering a sacred space. Every moment is thoughtfully constructed and beautifully delivered. You can feel the depth of relationship that Frank has with each student and his entire class. The intellectual rigor is high and the level of engagement on the part of students is real and genuine. For those students fortunate to have Frank Koroshec, it is more like “teacher of a lifetime” as compared to another year in school.”

Koroshec is a 1997 graduate of Westmont College with a BA in Kinesiology. He received his Master of Arts in English at Cal State University Northridge in 2004 and his Clear Single Subject Credential from the University of La Verne in 2005. He began teaching full-time in 2004 after a stint as a substitute teacher and an aspiring musician in a rock band.

He has received numerous other awards including the Santa Barbara Unified School District Teacher of the Year (2019), Crystal Apple Award nominee (2017), Educator of the Year award from the Goleta Valley Chamber of Commerce (2016), and Coca-Cola Scholars Foundation Joseph B. Whitehead Educator of Distinction (2015).